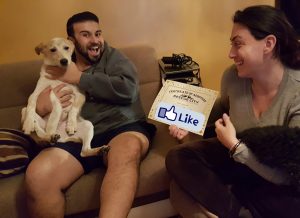 Snoopy is a 3months old Heeler a/k/a Australian Cattle Dog. Poor pup did not have a good start as he was rescued and placed into isolation at the vets office with a horrific diagnosis for a 3mo old pup who was suffering a double sided pneumonia. Luckily as soon as he became better we were able to set him up with an amazing Foster-Home which later became his Permanent-Home as his Mom, Dad and Brother could not fathom the idea of saying goodbye. Snoopy is n/k/a Jax and is very playful and loving, loves to cuddle and give lots of kisses to both humans and dogs alike.