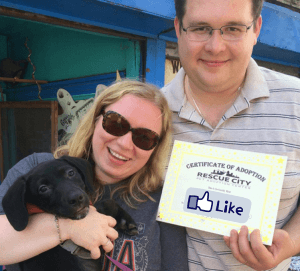 Hey, I’m Dixie, n.k.a Trixie! I was one of the 9 puppies rescued in the Avenue X saga, the X-Litter. Our rescue story is below, and you can also read the newspaper articles and see the news coverage of our rescue ! I am a black lab (possibly a mix, but the team doubts), frankly I don’t care if I’m a mix, and my mom and dad didn’t either! I was the good girl, the team really liked me, I had the cutest floppy ears and listened very well. I am the first dog for my Adoptive Parents and they spoil me rotten! I graduated puppy classes and live with my sibling cats ! I’m just awesome! Oh, and I am now known as Dixie!

On June 16 Rescue City was alerted by Facebook Activists of “really skinny puppies that were laying on the grass of a front yard; they were not active like puppies should be and we can see all their bones; the man outside said he’s selling them for $1000 each”. Our Team rushed to the address where dozens of people got together to protest. After convincing the owner to let us see the puppies, we knew, these guys had days to live: they were neglected, malnourished, emaciated, lethargic and had clear signs of ringworms. There was no way to take the puppies away for free and we were not going to let them die. He took a much lower offer on the puppies and we were able to rush them to our vet. They spent the next 4 weeks in ICU care as several of the pups tested positive for Parvo.  The local news stations covered the whole rescue from the start “They say cats have nine lives, but nine puppies in Gravesend could have lost the only lives they have if not for some generous animal rescuers from the neighborhood”. Police later arrested the man who sold sick puppies on 10 various animal related counts.

We can’t begin to put into words the horror of animal hoarding and what it does to it’s victims. We need YOUR HELP to help them with their transformation and provide these dogs with the medical care they’ve neglected to receive their entire lives.

We are happy to step in to change the lives and fate of these dogs, and are pleased to have the opportunity to show them that kindness and compassion exists.